How are politicians able to send you text messages without your approval?

As votes continue to be tallied for the 2016 Australian Federal Election, the topic of text messaging has come into the spotlight. Text messaging campaigns are popular when it comes to politics, since politicians can reach their supporters quickly and directly. You might have received a message from a party that you support, but you wouldn’t be alone if you were also sent messages from opposing parties. In the case of the Australian Labor Party (ALP) Medicare campaign, you might have also received a highly misleading message as well.

Here’s a scenario: It’s Saturday night, and you just received a text from an opposing political party. You do not support them, and definitely did not opt-in to receive any promotional material from them. Since this message was unsolicited, it has to be spam right? The answer is, not necessarily.

Let’s refresh our knowledge of the Australian Communications and Media Authority (ACMA) Anti-spam Act. ACMA clearly states that the following organisations can send messages without consent:

To Quote the ACMA:

If an organisation falls into one of these categories, then any commercial electronic messages it sends are exempt from the Act’s consent and unsubscribe conditions if, and only if, the messages relate to goods or services supplied by the organisation that authorised the message. Note that such messages must still comply with the identify condition of the Act.
template

What went wrong with the ALP?

If you are based in Australia, or a curious international spectator - you might have heard about the Australian Labor Party (ALP) Medicare text. In case you haven’t seen it, here’s what it said: 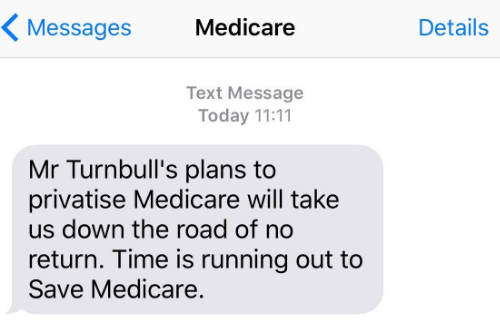 The first problem with the text above is - that it does not comply with the identify condition in the ACMA Anti-spam Act. Secondly, the ALP are also being accused of impersonating Medicare through the Sender ID. An ALP spokesman has stated that, “The message was not intended to indicate that it was a message from Medicare, rather to identify the subject of the text.” However according to the ACMA, “Any commercial electronic message you send must accurately identify you, as the person or organisation that authorised the sending of the message. If this condition is not met, the message is classified as spam.” This sender identification information must also remain correct and valid for at least 30 days after the message is sent.

In addition to this, the ACMA states that every commercial message must also:

Keeping all this in mind, the Sender ID should be used to identify your business. Adding anything other than your business name in the Sender ID may cause confusion. In the ALP’s case, a misleading Sender ID has initiated an investigation by the Australian Federal Police.

Why is SMS popular during election time?

Essentially, as long as a political party sends an SMS which meets the simple ACMA regulations above - then they have free reign on what they can do, and who they can contact. If used strategically, this makes sending an SMS campaign one of the most effective tools for politicians to get their messages out. Timing is of the essence in politics, and SMS campaigns can be sent at any specified time.

It’s important to also note that if you are questioning whether or not your SMS campaign is fully compliant, just simply contact your SMS provider and ask them to screen it. This will help you avoid a potentially disastrous situation. If your provider cannot give you an informative answer, then it’s time for a change.

Final Notes from the Editor: We hope you found this article informative. This article does not advocate support for or against any political party. The moral of this lesson is to text responsibly, and if you’re not sure - ask.

Author: Leana Yang - Marketing Manager at Burst SMS You can find her fiddling with numbers, painting pixels, and making magic out of words. If she goes missing, follow the trail of cookie crumbs.

SMS for Politics and Government officials