It all started in 1999, when two Aussies found each other on the bustling streets of London. Their names were Brad Down and Alex Macpherson. They didn’t know it at the time, but this was the start of a 20+ year-long journey.

There are two sides to the cerebral hemisphere in a human brain: left and right. In a perfect partnership, a duo should be strong on opposite sides.

Although their complementary skills made them a match, it was their core fundamental values which kept them together.

Trust, transparency, and staying motivated through a shared purpose was the glue that kept them together.

When Brad and Alex started to brainstorm how their first business might look, they laid out every single possible scenario that could have happened. Many questions were uncomfortable, but the outcome became a key component in how well they have worked together over two decades. Their duties do not cross over, and they have full trust in each other to perform responsibilities to their best capabilities. They are prepared for any uncomfortable situation that arises, know when to give space, and still look forward to seeing each other grow every day. 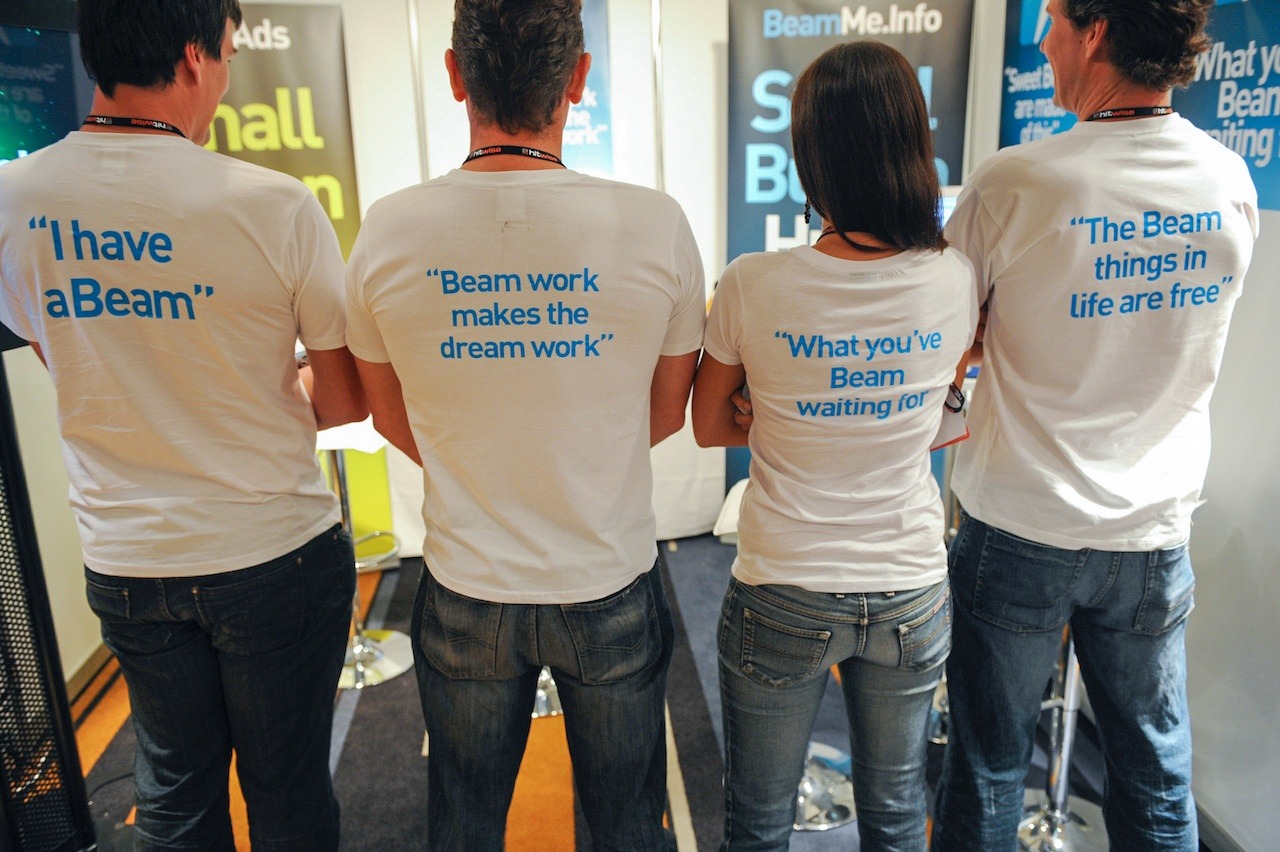 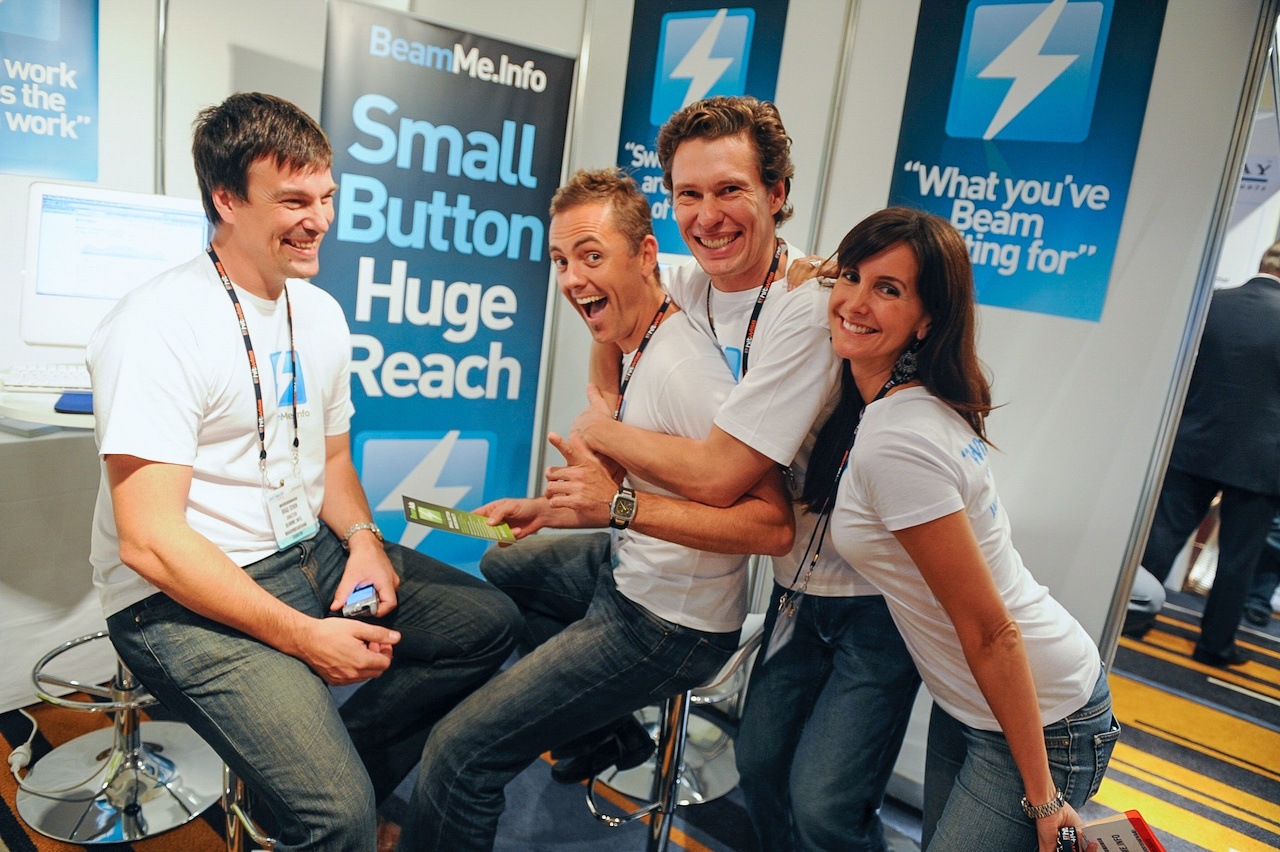 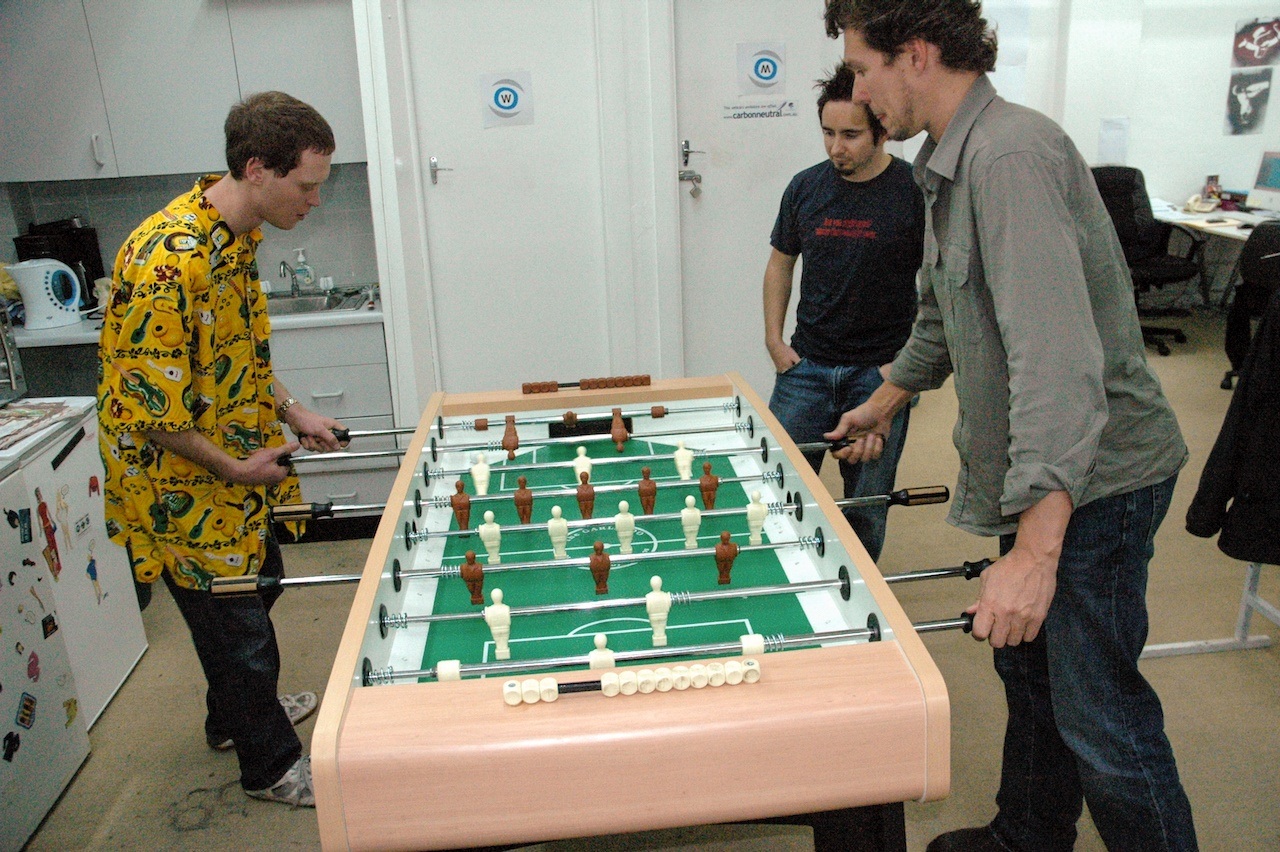 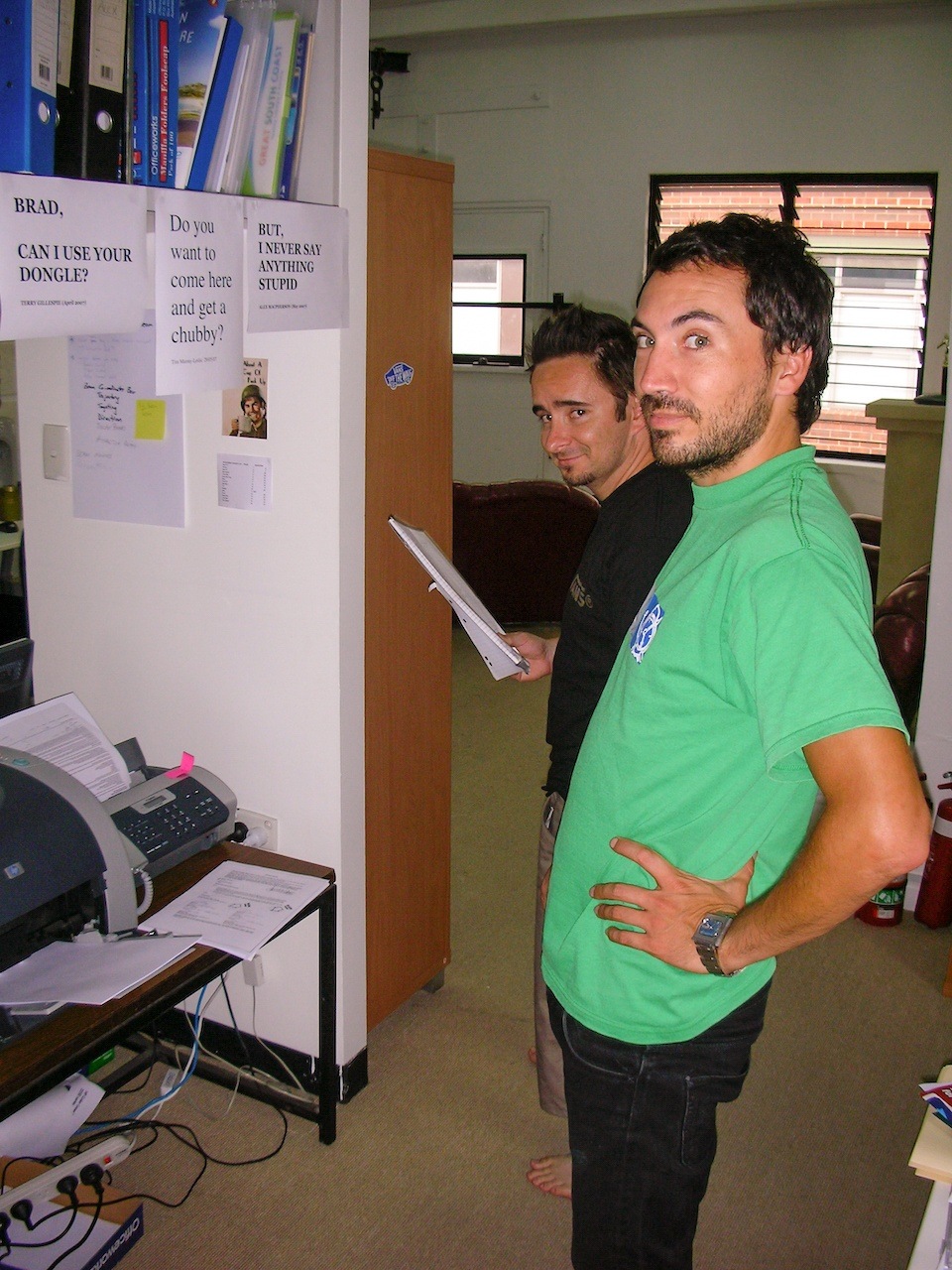 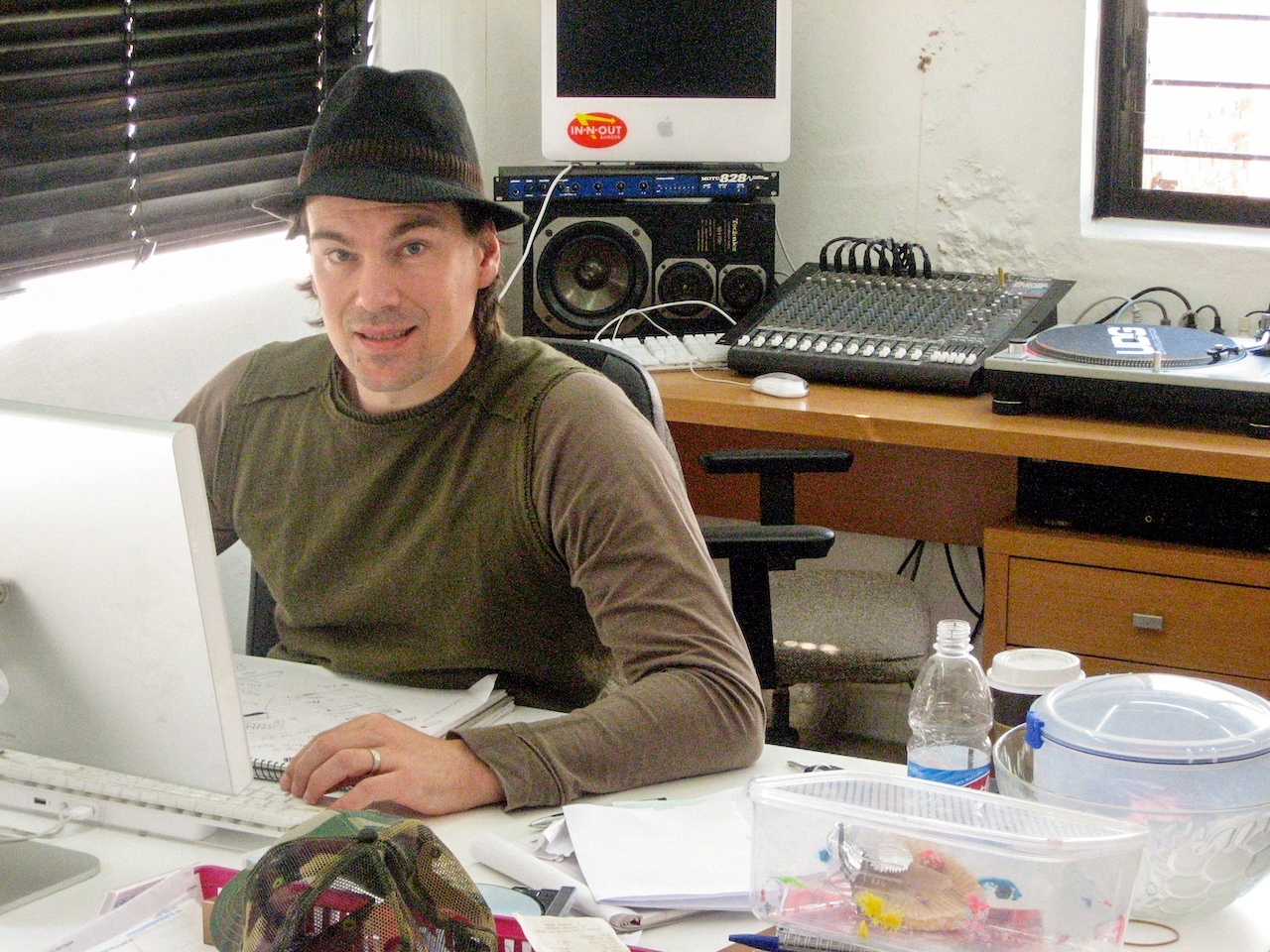 Cheesy puns was another shared value the two partners had. BeamMe was the birth child of a massive pain point at the time. The service transferred information from your website to your phone sent via text.

Avid Foosballers
When competitiveness was at its peak, they invited an ex-foosball champion to come in for a day to coach the team. Alex referred to this moment in time the most ridiculous and inefficient period of BeamMe. Both founders have since shot down any suggestion of bringing back the foosball table. The once loved foosball table is now a hard no.

Many classic start-up mistakes were made at BeamMe. This was especially true when it came to working in stealth mode. Development philosophies however were fine-tuned, and they chose the right fundamental values to succeed. BeamMe became a success with funding behind it. The office was buzzing with excitement, and the sound of a foosball echoed throughout the day. 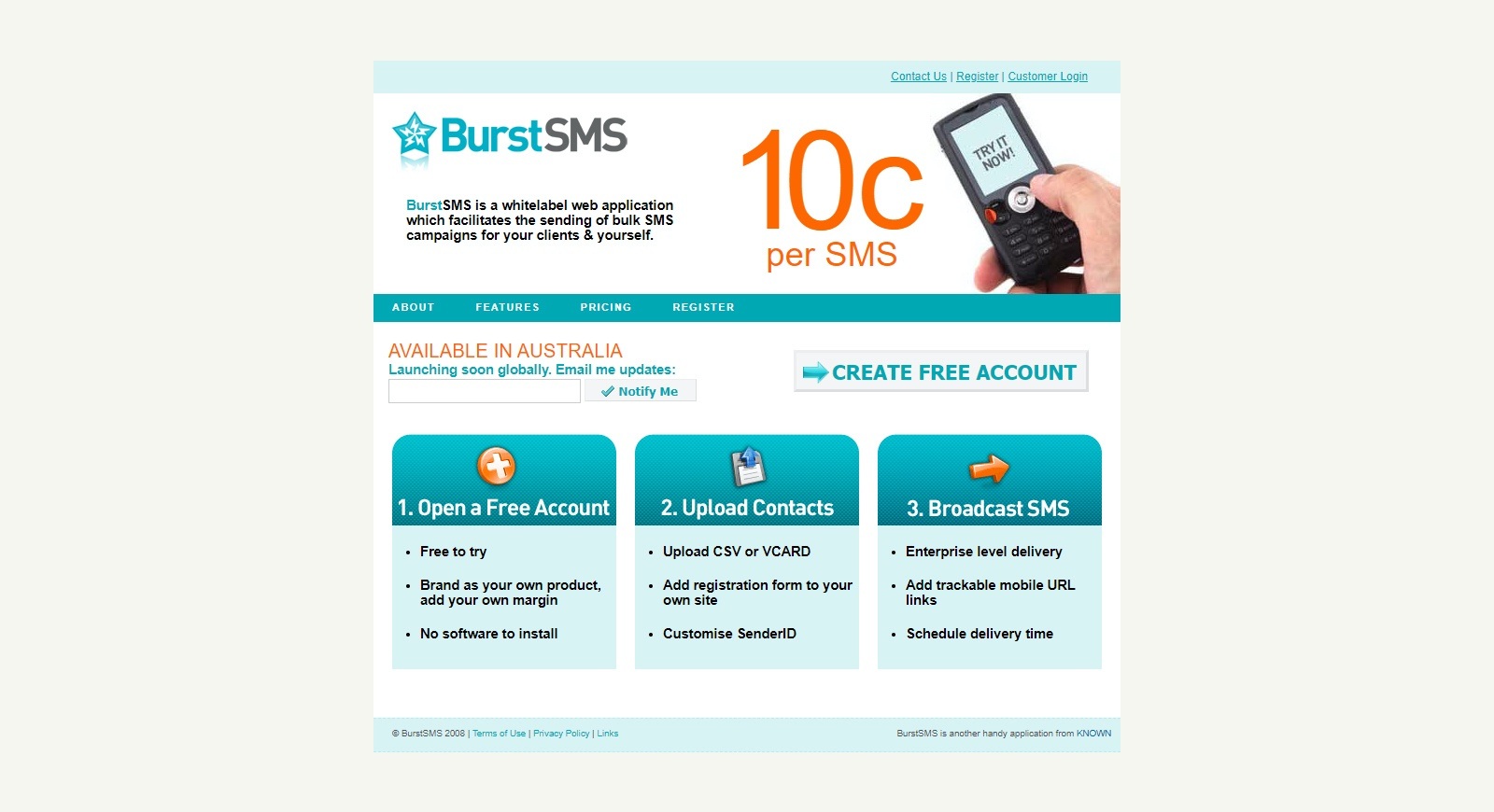 After exploring multiple ventures from 1999-2008, Brad and Alex saw an opportunity with the rise of the iPhone. They started to conceptualise a SAAS-based text messaging service called Burst SMS, which was their way of pivoting and evolving from BeamMe.

Many companies called it quits after the Global Financial Crisis (GFC), but Brad and Alex saw the success of the iPhone and the increase in texting volumes, as an opportunity for businesses to connect with their audiences on a more personal level. They loved what Campaign Monitor was doing as an email platform, and saw a need for a text messaging equivalent for professionals. 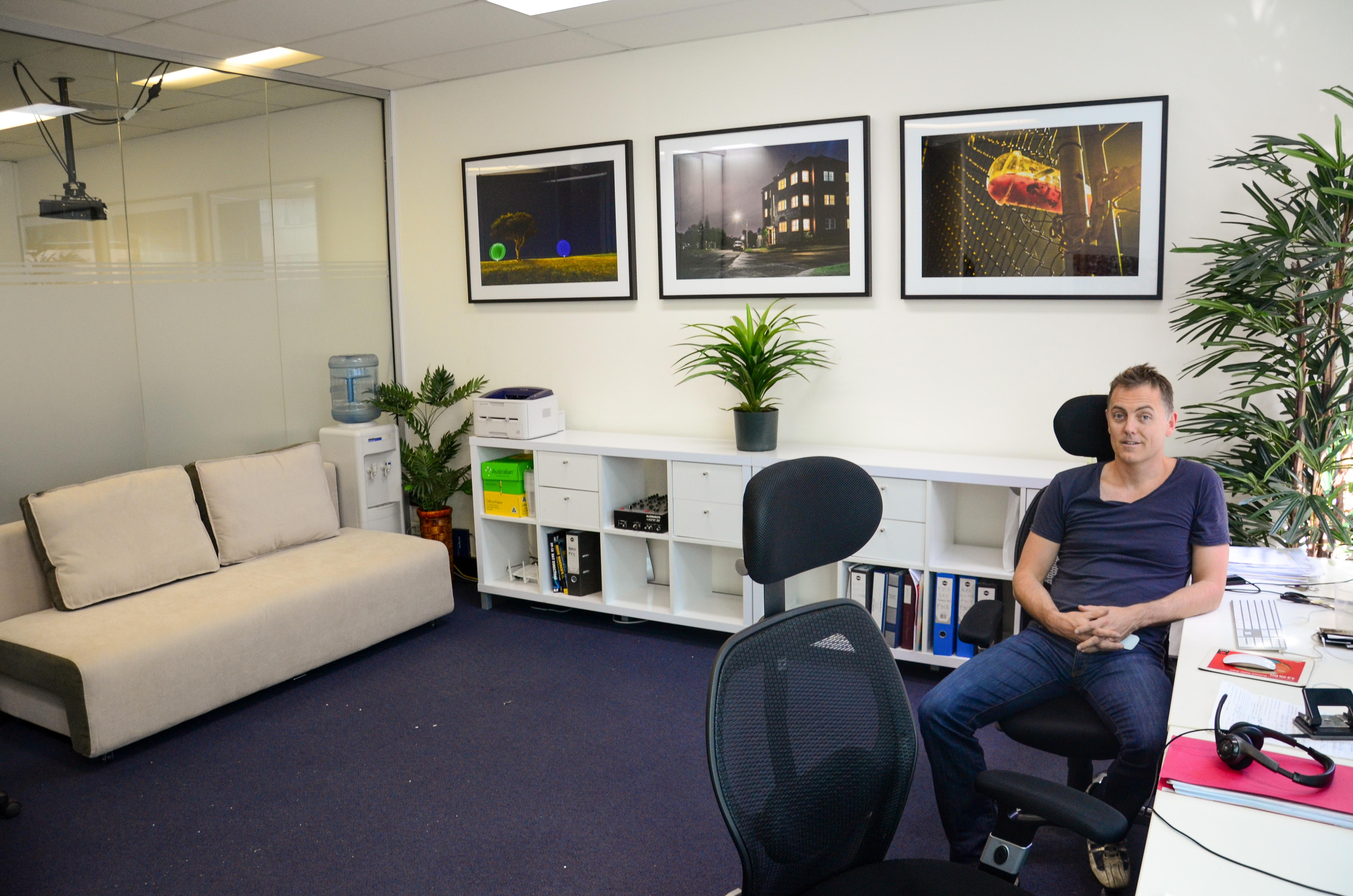 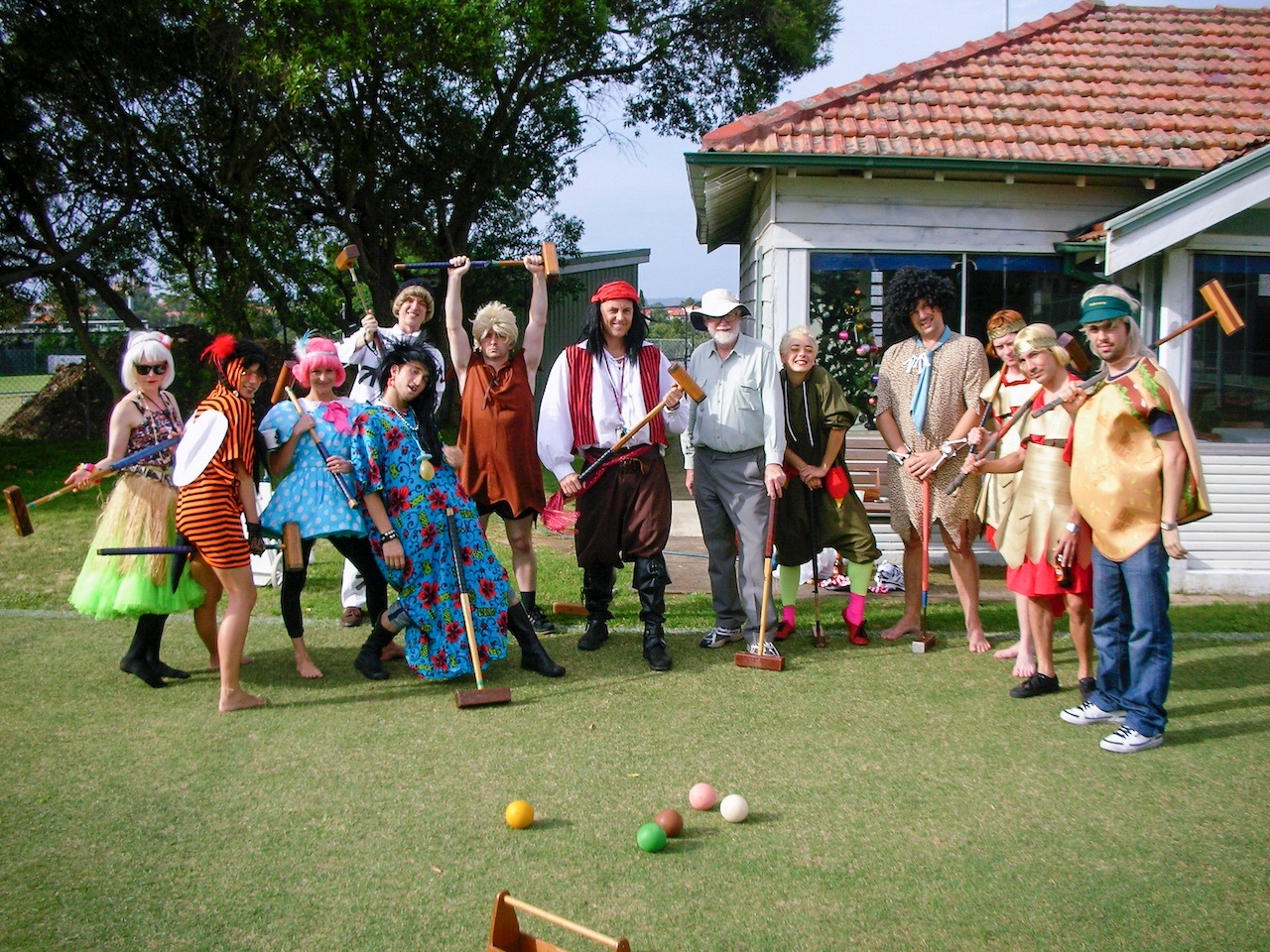 Brad and Alex decided to launch Burst SMS with their own personal funds, rather than going the public route which they did with BeamMe.

They aspired to do things the right way by not selling the sizzle. They wanted to action great ideas quickly, and to be early adopters in implementing CX-centric methodologies. The goal was to deliver a genuinely useful service which people actually wanted, and to become a true cash flow positive business. This wasn’t a seamless transition; however, as they struggled in the first 3 years of operation.

Through both personal and financial struggles, Brad and Alex made ends meet by managing multiple businesses. They operated a marketing agency, invested, and ran a fancy dress shop to fund the build of Burst. Rent was also minimised, as their tiny office was located directly above the fancy dress shop. Motivated to survive, they believed in Burst. They remained strong through the tough times, and were willing to truly risk everything they had to help Burst succeed. 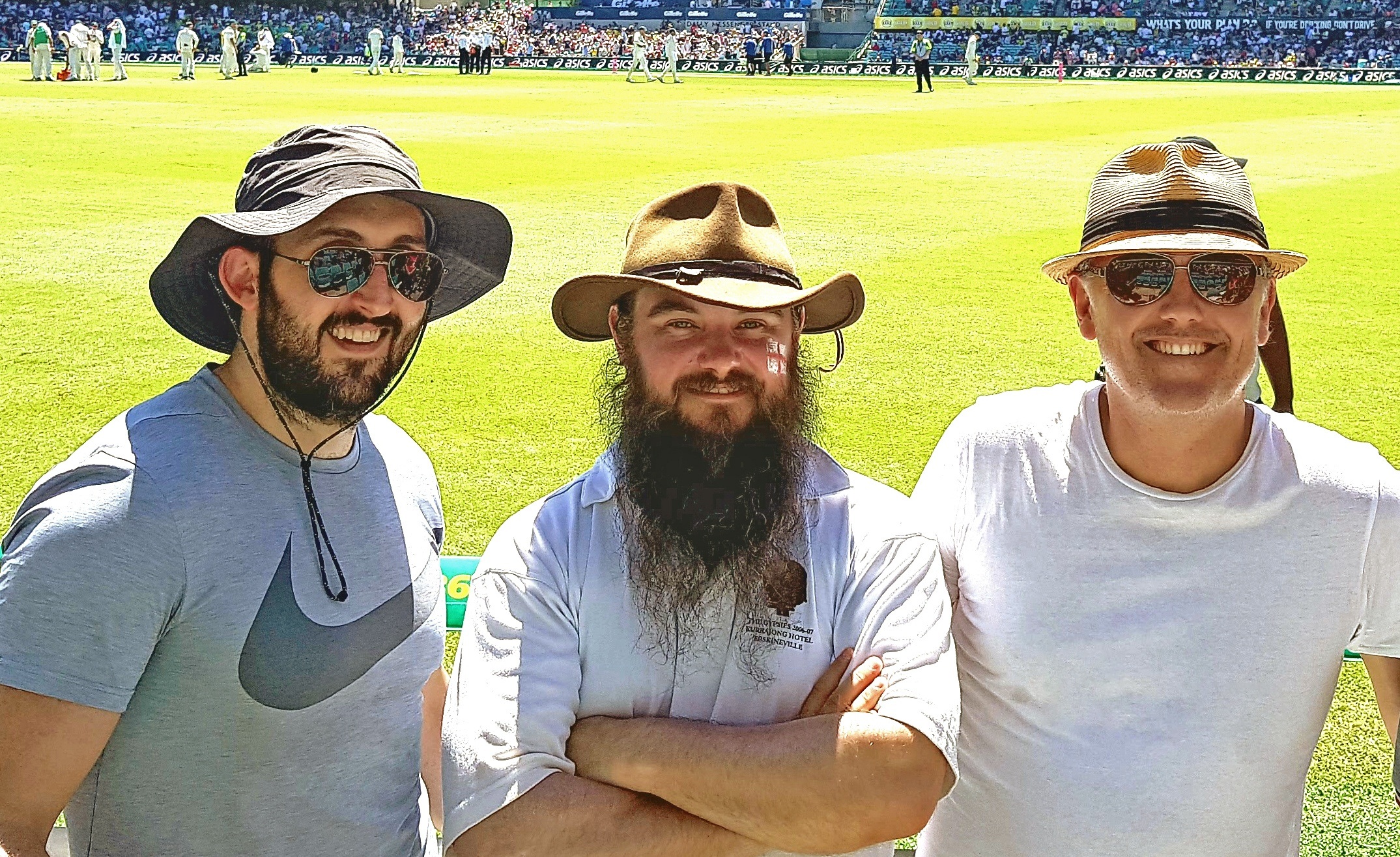 Guided by sheer will and determination,

Burst saw its first positive profit line in 2012 and never looked back. Their pre-paid model was working, and the business was now cash flow positive. Brad and Alex believed in reinvesting profits back into the company, prioritising finding the right CTO as their first official hire. Through a close referral, they recruited Mike Bissett.

Employee #1
You can’t miss Mike, his beard is legendary. It was shorter and less grey when he first started, but it’s very whimsical now. He lives in the mountains, and has an annual tradition of wearing a chicken hat for the Melbourne Cup. He might look grumpy most of the time, but he’s quite friendly when you’re not pestering him.

Mike was born in England, and was a death metal connoisseur. The bearded bass playing fellow fought for the ideas that he believed in. He was a rare breed of developer, who would fit in perfectly with Brad and Alex’s very agile way of work. Mike came in and ripped the system apart. He didn’t just get things done, he believed in getting things done right. 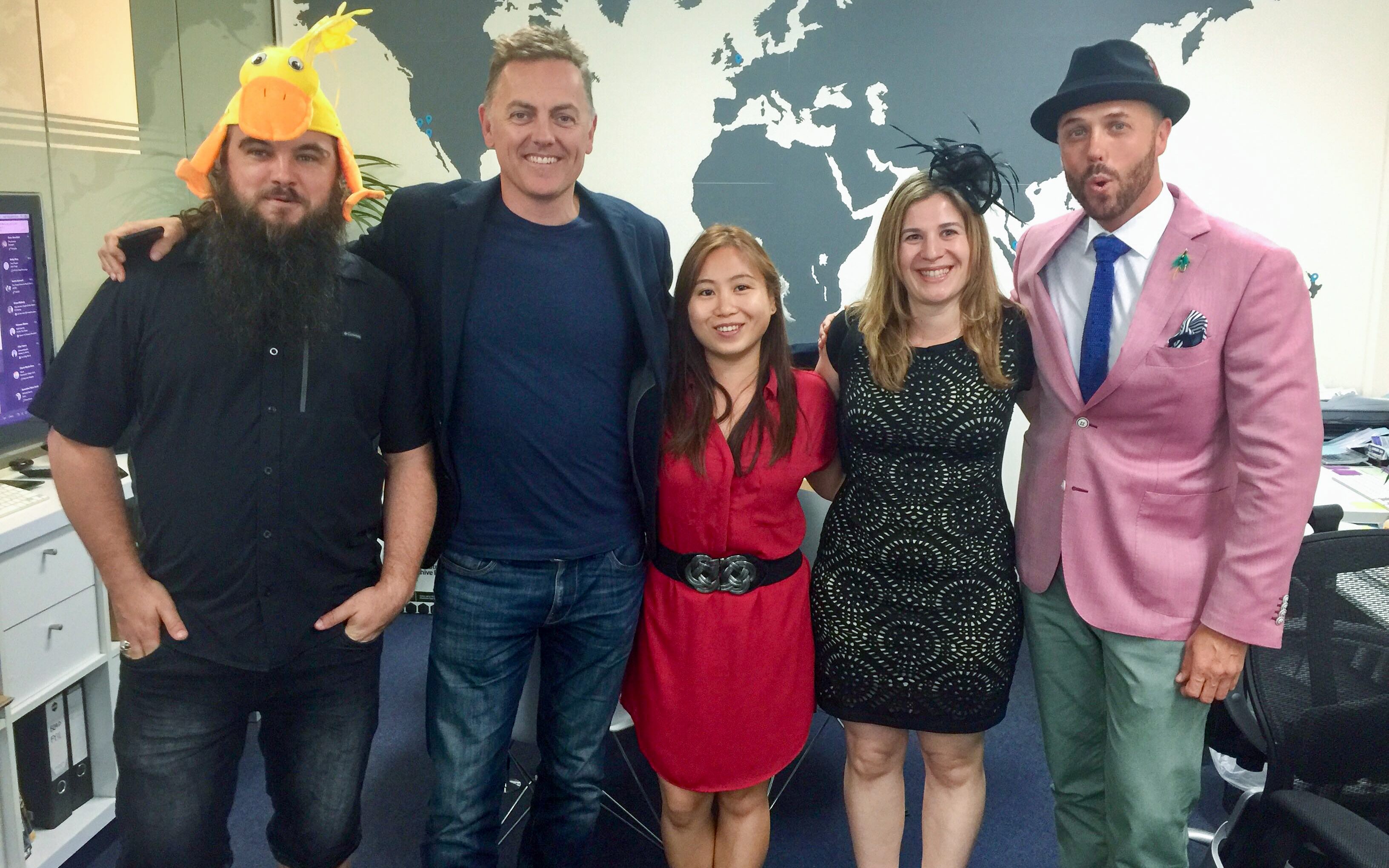 After increasing the SMS count by over 3,200% over 3 years (3 million to 100 million), Burst was ready to once again reinvest into the company. They took their time in the recruitment process and hired a Sales Manager, Support Manager, Marketing Manager, and a few developers to round out the team.

Bougie Birthday Cakes
The bougie birthday cake tradition started in 2015, when Leana (Marketing Director) asked the Sales Director what type of cake he wanted. He said a cake from Woolies would do, and she laughed. Brad then gave Leana $50 to buy a small cake. She came back to the office with an ice cream cake from Messina. Brad asked for the change, and she said, ‘Oh, I had to go $3 over, but it’s alright.” He was not amused, and unaware of how a small cake could cost over $50.. until he tasted it. The proper birthday cake tradition still runs strong today. Never question the importance of a tasty cake.

Burst now had all the key roles filled, and these individuals were responsible for the risky job of laying the foundation. The utmost trust was bestowed upon their new teammates, as they were given a blank canvas to experiment with. This is where things could have gone terribly wrong, but thankfully the right choices were made. 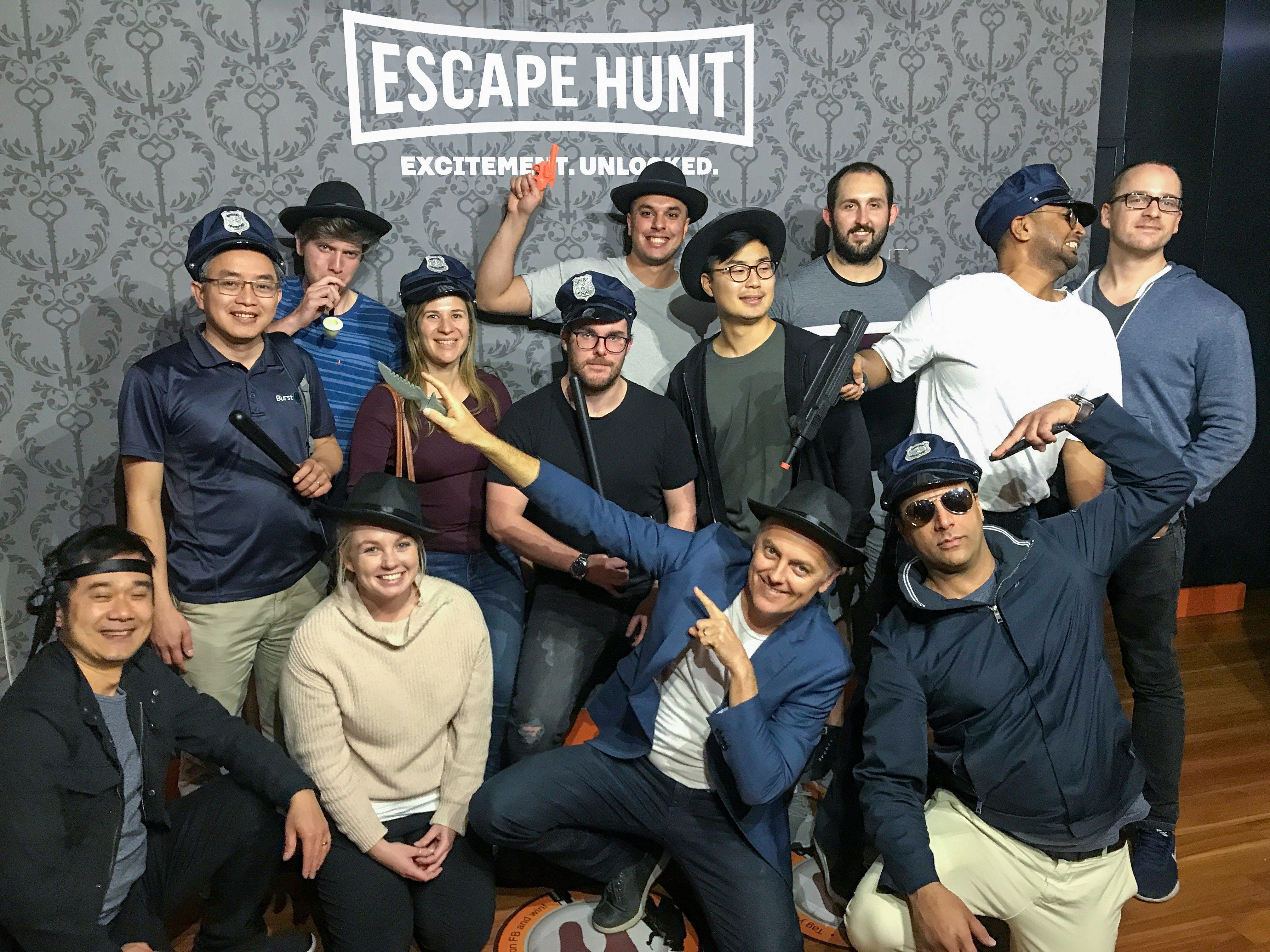 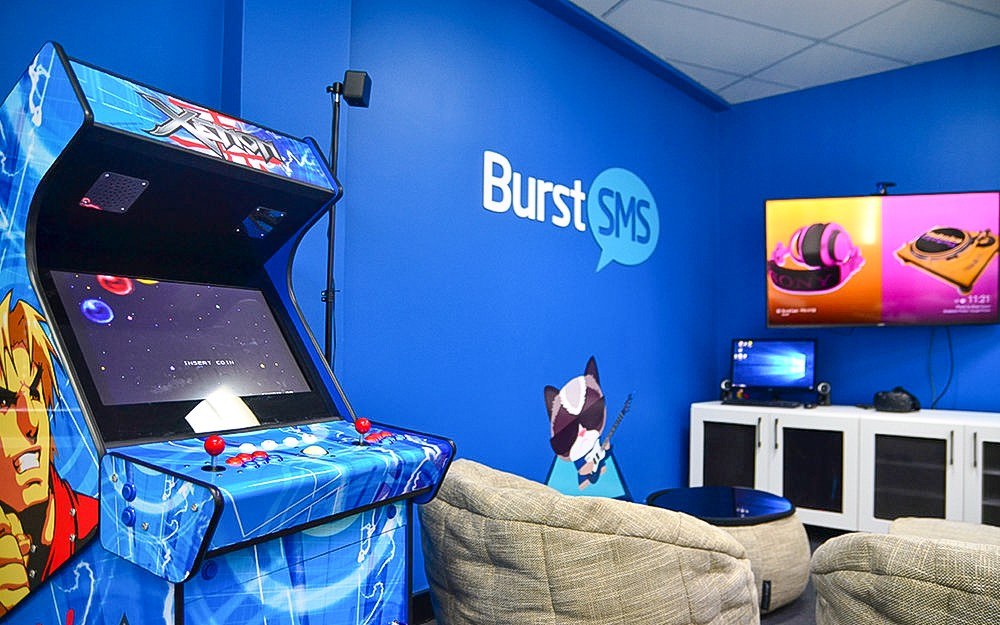 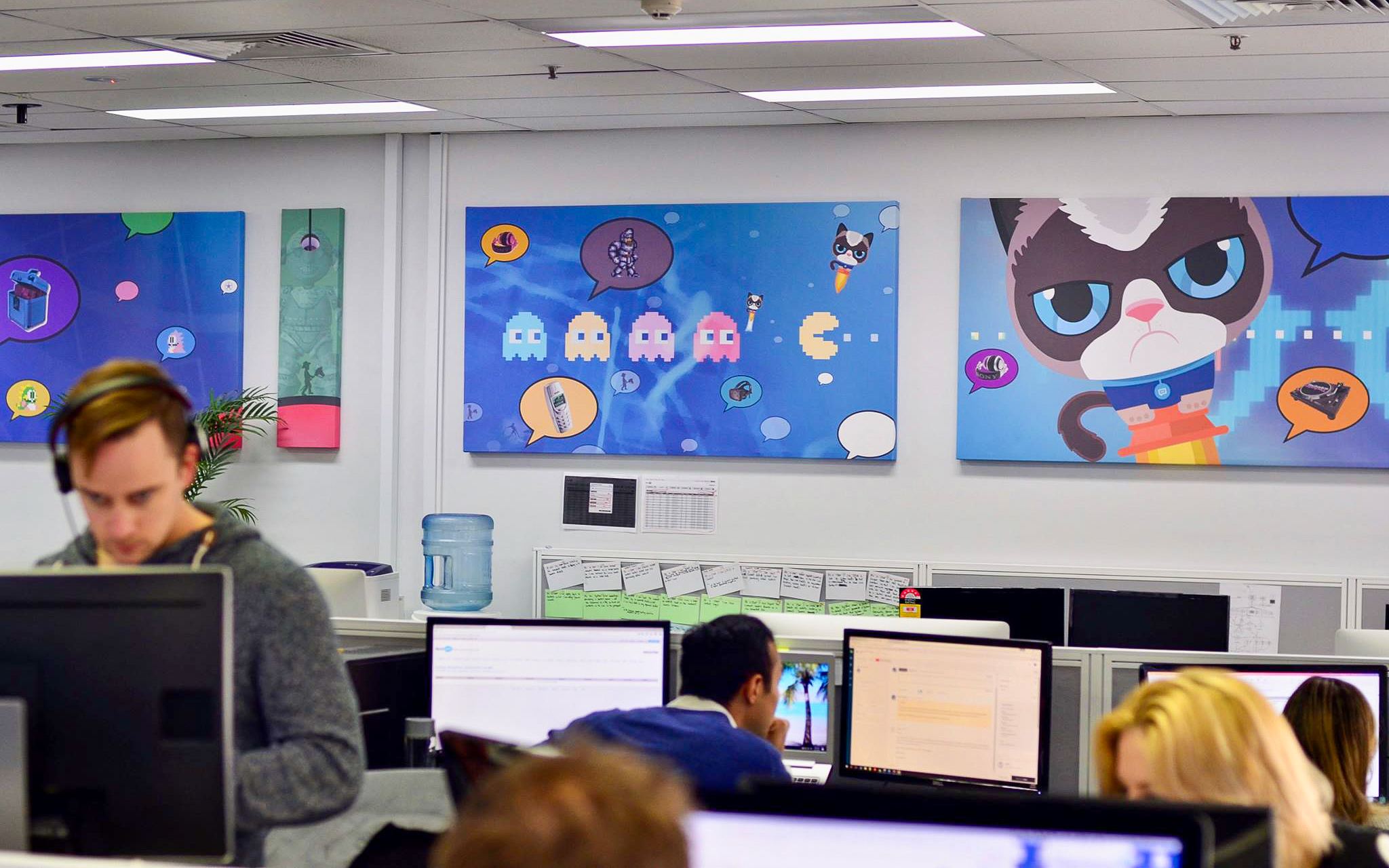 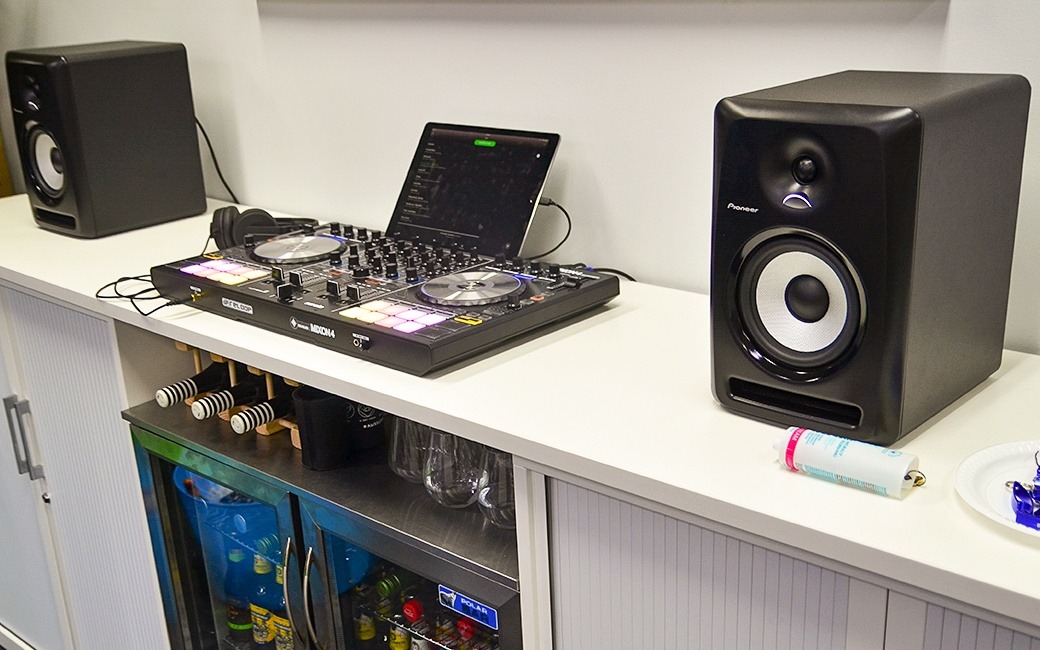 The risks taken in 2015 were paying off, and back-to-back awards came flooding in. Burst could be spotted frequenting multiple growth lists including Deloitte’s Fast 50, Global Fast 500, AFR 100, and Smart Company.

Positive Vibes Only
Brad and Alex were once epic DJs back in London. They hosted some of the most legendary nights called House of Fury. Sweet tunes, great art, and just generally having a blast in life still runs through the veins of these founders. This positive outlook, and fun balance in life is something the company still echoes to its team today. The original posters promoting their nights can still be found on the office walls.

Celebrations were in order, and Burst found the right people to come along on the journey. Friday drinks became a staple, as 4:44pm marked happy hour. Then came the virtual reality set-up, putting green, bar fridge, and an arcade machine with 3,000+ games. Branded bottle openers were ordered to pair with the drinks.

Speaking of things to compliment the bar, a DJ rig was installed as the founders said it was absolutely necessary. The team agreed. 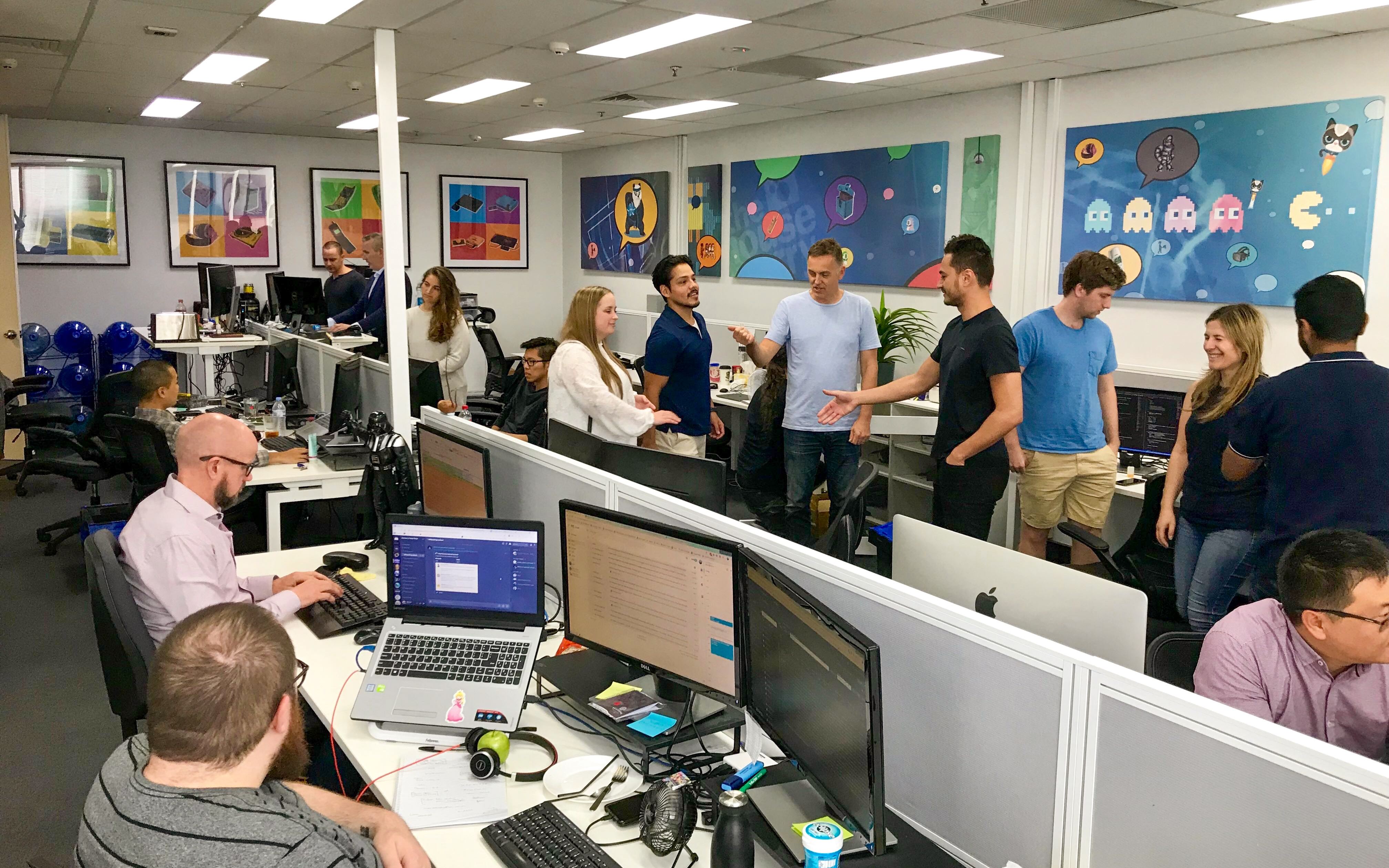 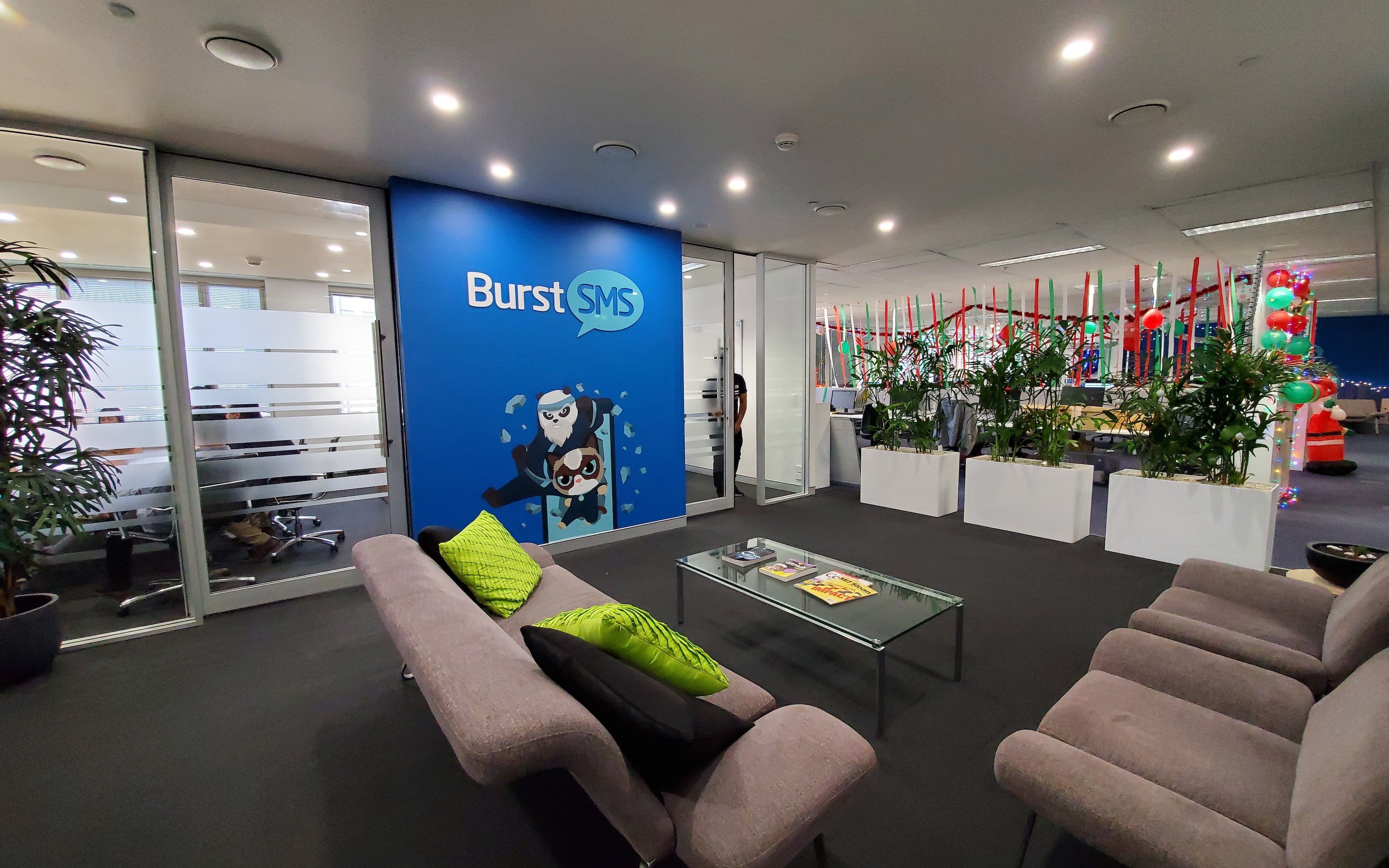 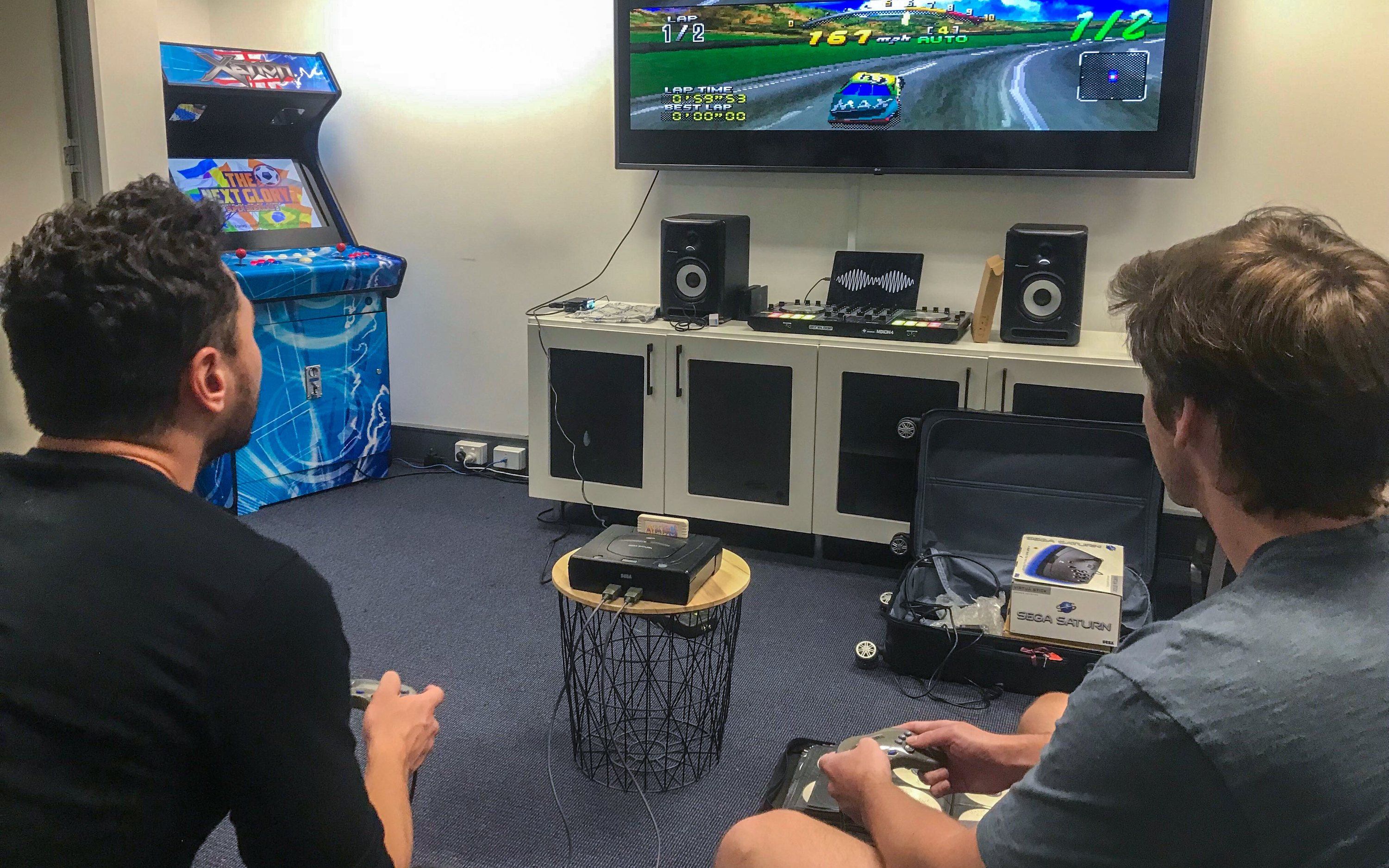 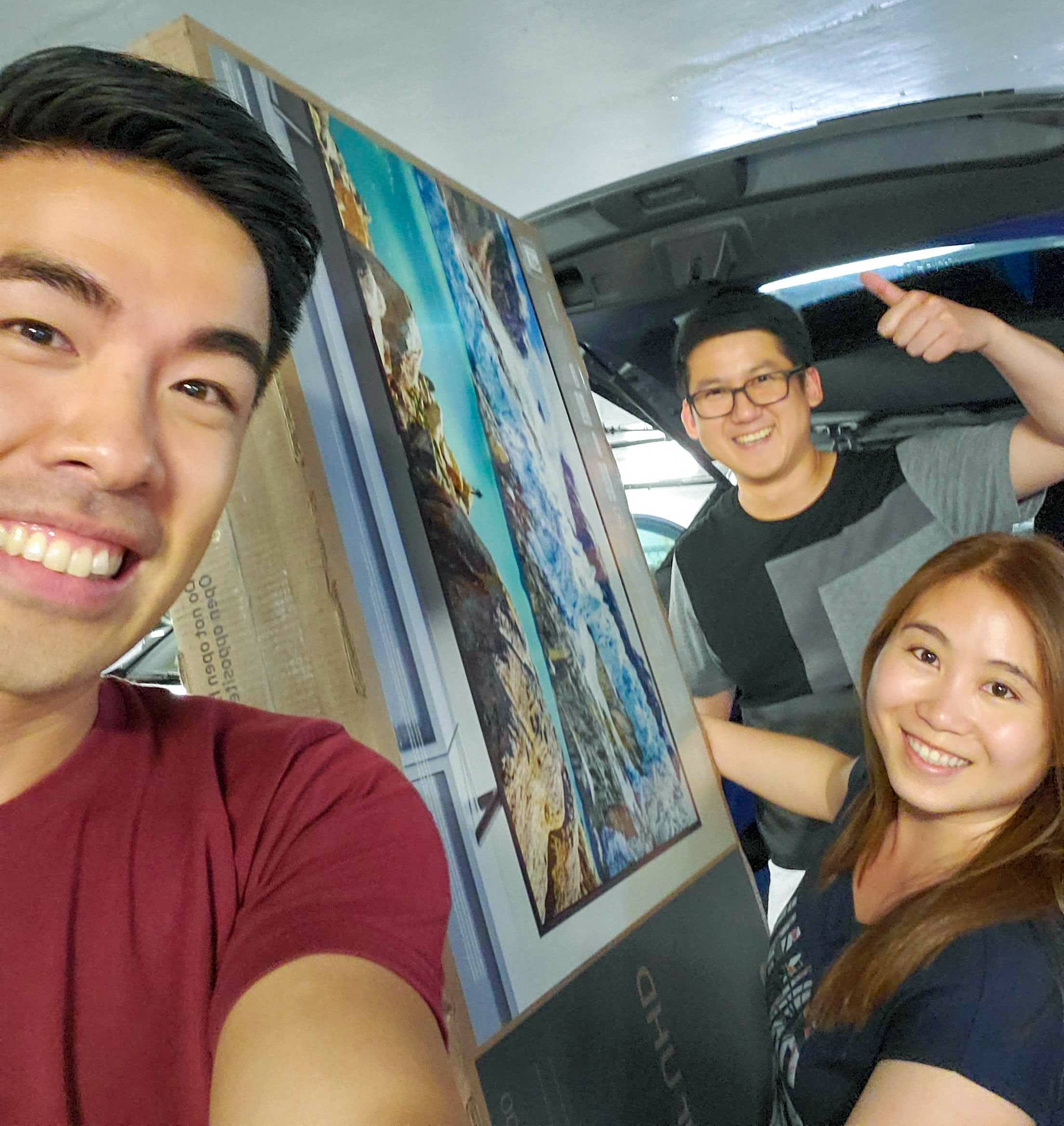 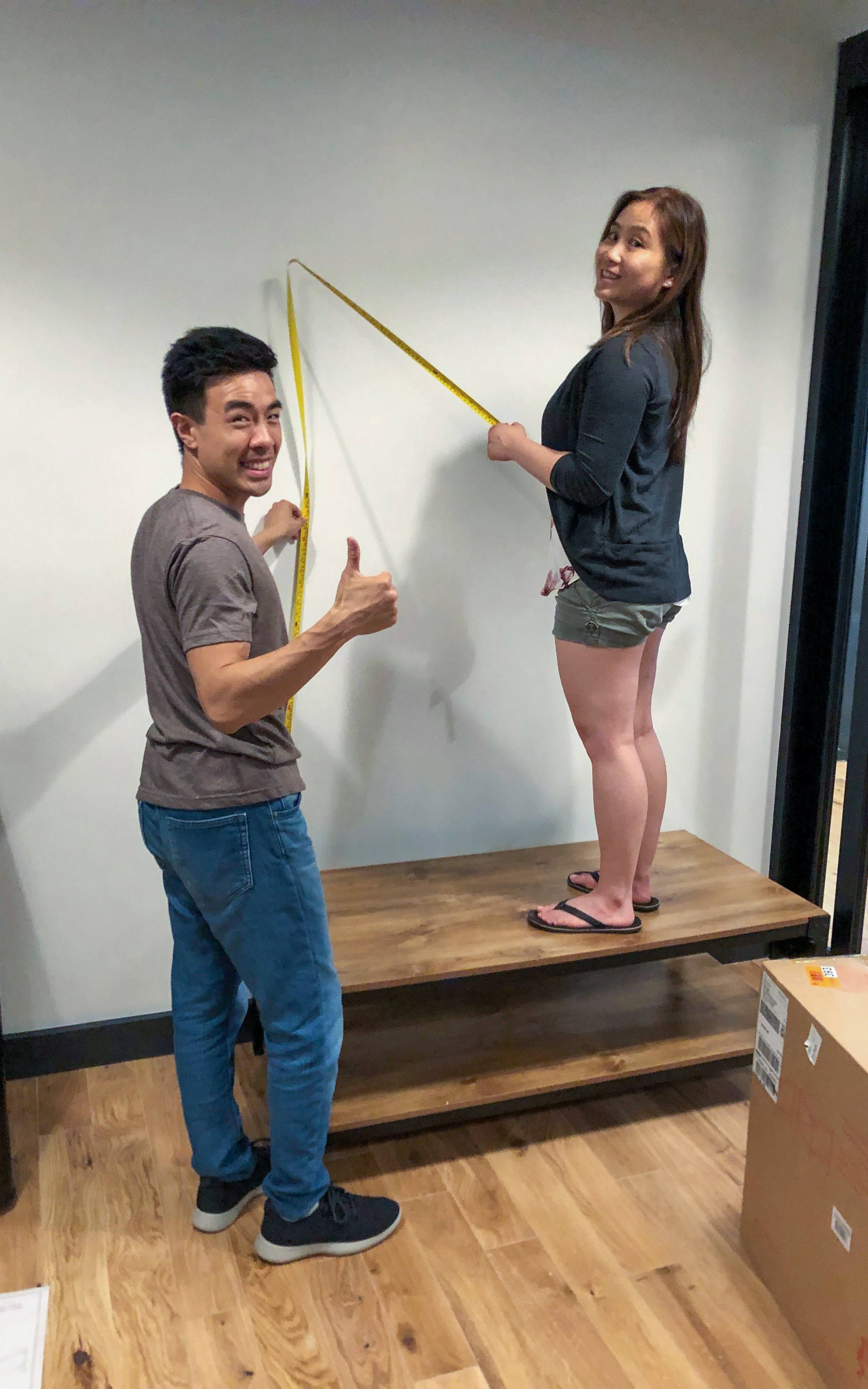 Burst now had 4 offices around the world, all bursting out of their original locations. Attracting the right talent, brainstorming new team bonders, and securing more comfortable office spaces was now a common occurrence. These were high-quality problems that every start-up works towards on their mission to exponential growth.

Exponential Growth
In 2019 alone, the headcount increased by 125%, and the global office space increased by 400% in size. The team was balanced and had the ability of both refactor and innovate at the same time.

Burst said goodbye to its original location on Pitt Street in 2019. History was made at that location, as wall after wall was knocked down over a span of 9 years. The terrible washrooms however will not be missed, and the end of trip facilities alongside the new spacious office was worth the move.

The smallest boardroom is now larger than the original size of their first office.

The team now had the freedom to use their new found space for good, such as having a hobby horse race around the office during the Melbourne Cup. 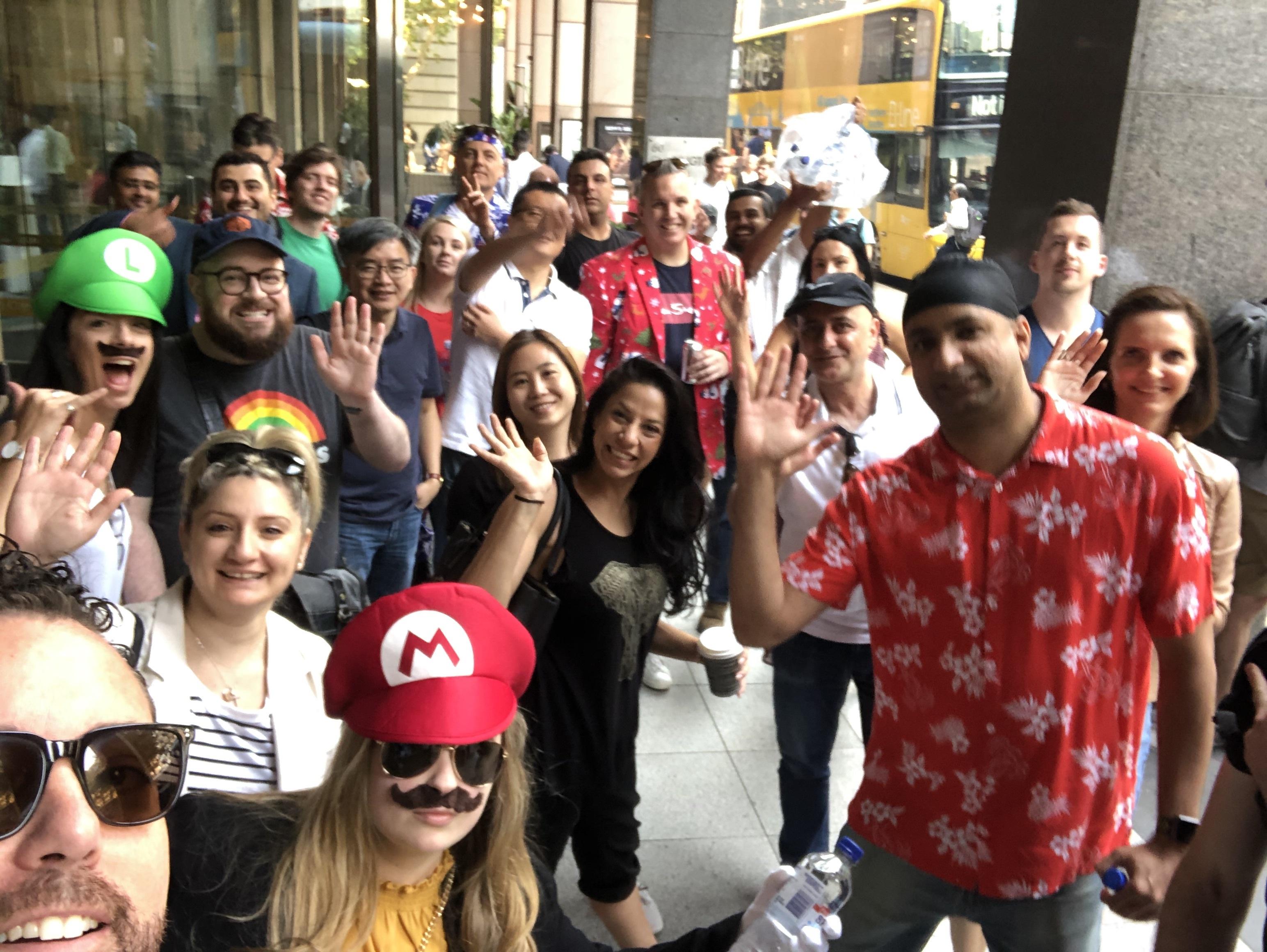 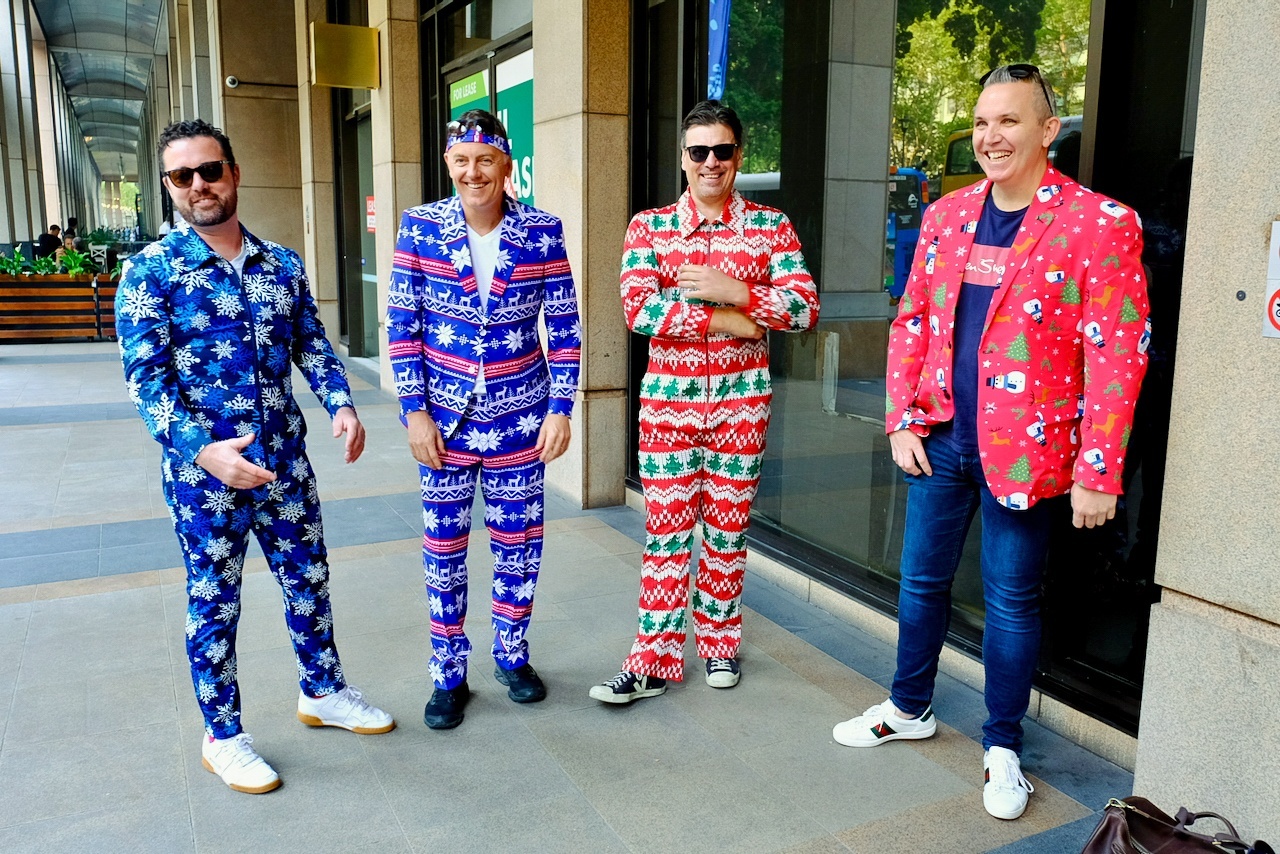 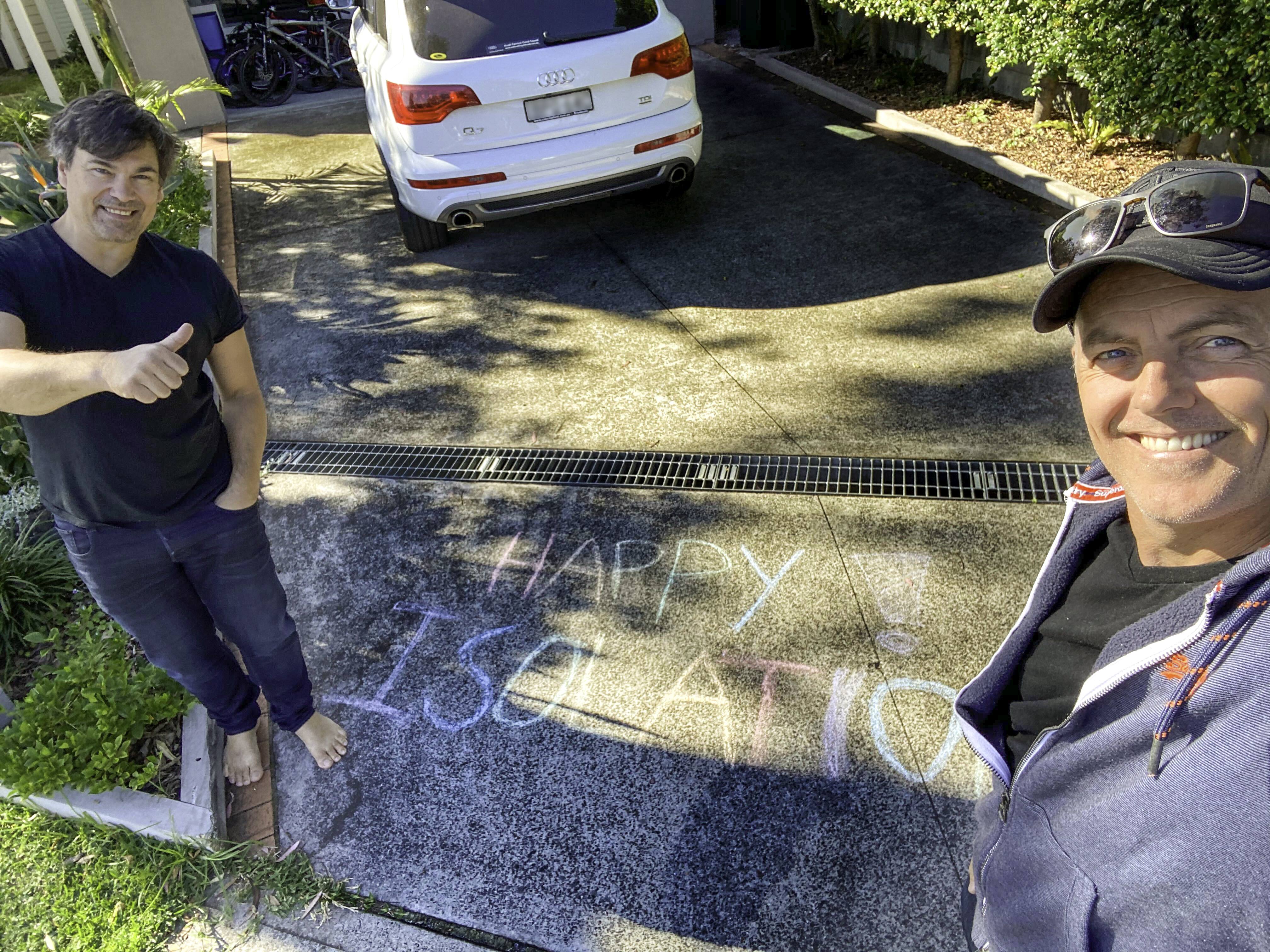 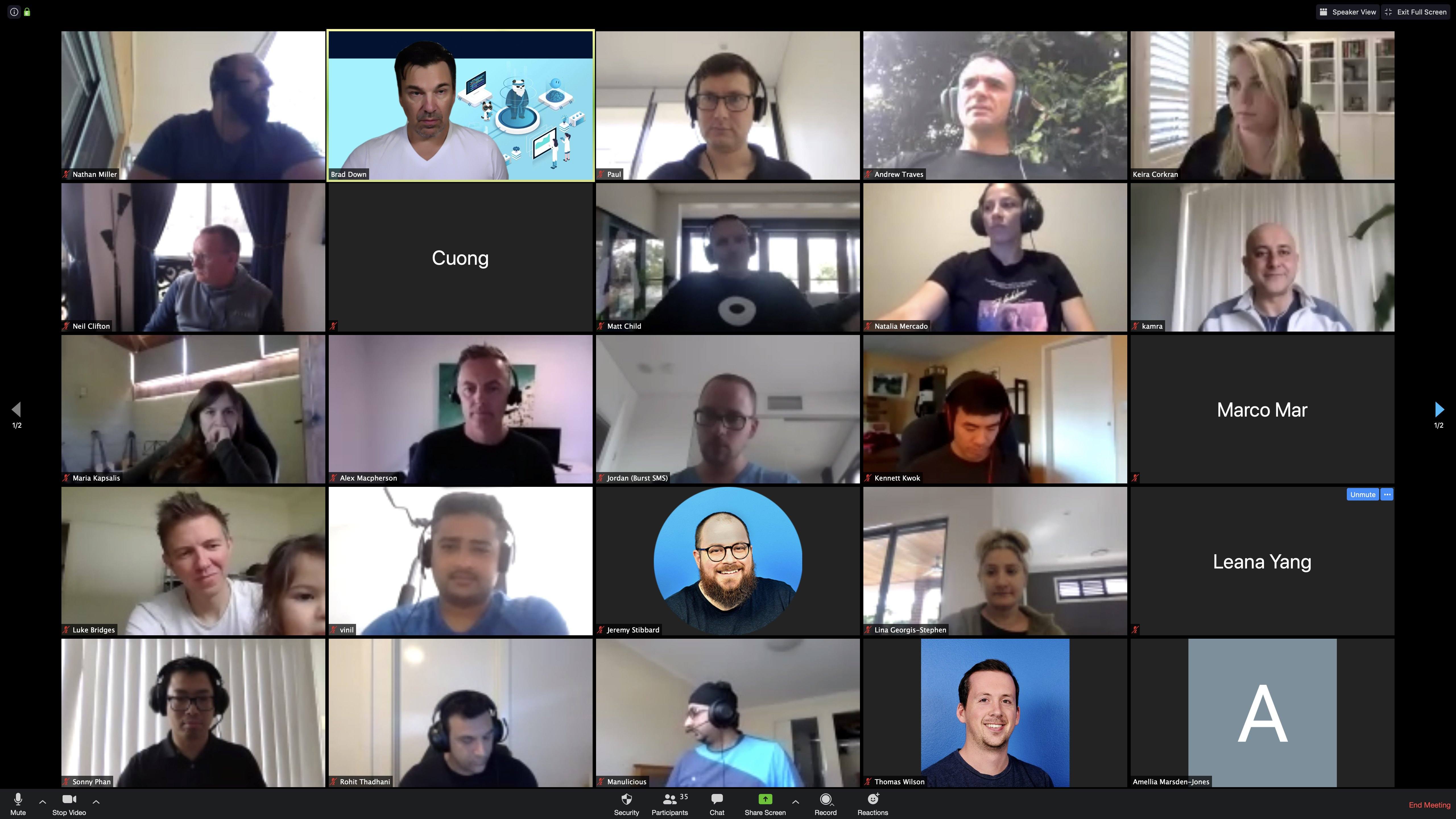 Although these are turbulent and unprecedented times, Burst was founded during the Global Financial Crisis (GFC). Their ability to pivot, sheer resilience, and genuine belief in the platform still runs strong. They have a value-driven roster, each motivated by their own story.

Every team member is equipped with the same trust instilled in the original hires, and through this have the flexibility and initiative to bring something new to the table. Text messaging as a service has also grown throughout decades, resilient as service on its own despite 4 global recessions.

This new century started off strong for Burst SMS, as they celebrated a record breaking month in March. They were ahead of schedule in breaking the 1 billion SMS mark, and became ISO27001 certified in April. Amazing things are on the horizon from platform upgrades, new features, faster performance benchmarks, and more insightful strategic content.

Stay tuned as they continue to write this story.