A look into a new target audience - Netflix subscribers

Every business has a rough idea of who they want to target. No matter how prepared you are, customer habits are constantly changing. This means you need to change with them. When it comes to marketing, you may have found yourself struggling to accurately label your new target audiences. Change is happening at a rapid rate. Attention spans change. Retention factors change. More importantly snack preferences change, but we will dive into that later.

Many popular brands and services are gaining loyal followers, which are developing into large and dependable target audiences. Netflix for example has not only become a verb, but it’s now a noun. It describes a very specific group of people with characteristics which appeal to businesses around the globe. This may be surprising to many since Netflix seems like a fairly new company, but it’s actually been around for 20 years (founded in 1997).

Okay, so here’s where the fun part starts. Through the steady increase of consumers purchasing more data and widespread 4G LTE coverage (with 5G along the way), mobile users no longer fear the thought of streaming large videos. This is a massive cultural change, which will allow you to be much more immersive in marketing to your customers. In the last year for example, Netflix has increased their mobile views by an astonishing 82%.

I wasn’t kidding when I said snacks were important. Nielsen knows how to compile an impressive list of data that we love to indulge in. 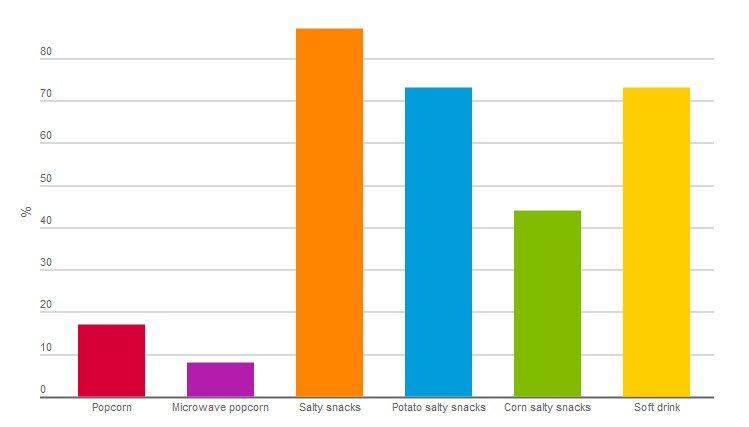 As irrelevant as this portion of the article may seem towards your business (unless you’re a grocery or snack store of course), there’s a point to this beautiful graph. Netflix consumers want to be trendsetters. Traditionally you would expect them to be snacking on popcorn, but that’s not the case. The classic potato chip is a close second, but not their highest preference. They like to try new things, and are willing to take chances on new experiences. Remember that.

If you want to target this new Netflix demographic, then let your creativity shine through. Get their attention, and you will reap the rewards. Good luck, and snack well my friends.

20 Highlights from Meeker’s Tech State of the Union Report