As we reflect on the end of a decade, let’s take a quick peek at the history of communication, how it has evolved over the last few thousand years, and what it looks like now.

The first significant form of communication was language. Knowledge passed down from one generation from another via storytelling for thousands of years. Somewhere between then and now, storytelling came in the form of paintings, clay tablets, and the 15th-century printing press.

But as we know, these forms of mass communication didn’t make an impact like the Internet did. It opened up doors for many technological advancements over the last few decades, especially for how we communicate.

The Evolution of Communication

Each generation has had its novel communication technology. How we converse drastically changed throughout each generation.

Many businesses could leave their mark on a generation just by existing and being the only option available.

These messaging tools left a mark on their respective generations, especially email and SMS, which have done more than hold their ground for businesses compared to newer innovations.

For Centennials, they experienced an array of messaging services to cover almost every situation. New and instant social messaging apps launched at an unprecedented rate, with a variety of older technologies at their disposal too.

It gives them an abundance of choice—perhaps even distractions that perpetually lower their attention spans (including the older generations). 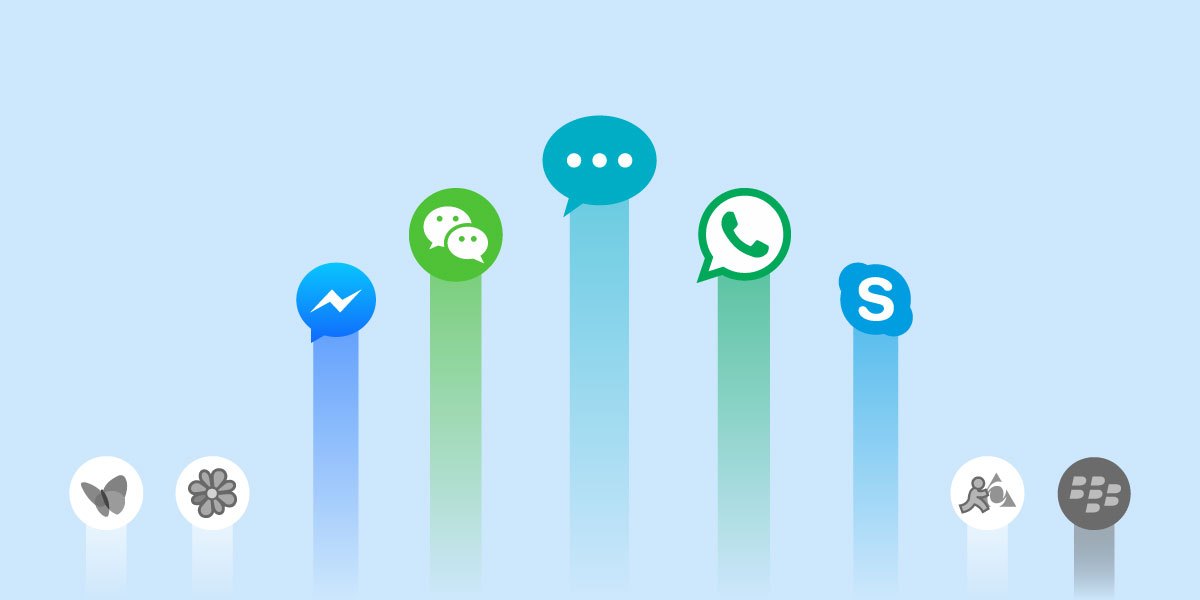 As an online SMS service, we often see how the humble text message stood the test of time. SMS was the first messaging app of its time and is still very relevant today.

We can’t say that about other messaging tools. If we take a trip down memory lane, it’s surprising to see some big names disappear. We’re talking about iconic apps like ICQ, AOL Messenger, and MSN Messenger.

Even for integrated messaging systems like BBM (Blackberry Messenger) have recently been discontinued in 2019. While WhatsApp and Facebook Messenger are dominant players today, we can’t say what their future might hold 20 years from now.

To explain why history may repeat itself, let’s take a more in-depth look at the numbers.

What the Numbers Tell Us

Earlier this year, we released our annual State of SMS report, where we featured numbers, comparisons, and trends of today’s messaging and communication. Here’s an interesting statistic from the report:

Aside from text messaging (SMS), did you notice how everything else revolved around 1 to 2 billion? That’s because they all require their users to download, go through a registration process, and convince their friends and peers to do the same.

Their success is like a double-edged sword. On one end, you can applaud them for driving messaging innovation, such as sharing rich media or performing payment transactions. On the other end, these players created a divide amongst different demographics and groups. It’s no wonder why people often ask: “should I message you on WhatsApp or iMessage?” after exchanging contacts. These messaging apps might work within your friend circle but won’t always cut it for businesses.

Businesses want to reach all of their customers, which is why we still see popular uses of physical mail, telephone, and email because they’re universally available to virtually everyone. Many businesses are now looking at SMS because it is also universal, converts better than email, more straightforward, and customers love sending and receiving messages. With support of over 1800 emojis, SMS compares well with other platforms.

Messaging apps inadvertently create friction from onboarding and create incompatibility issues in developing countries where they may not have the latest mobile device and software. The only way to guarantee the majority of the world to receive messages will always be SMS and MMS.

For example, DoorDash is using SMS and MMS during an unprecedented time when contactless interactions and social distancing are becoming the norm. Expect more businesses to follow as we turn to a new decade ahead.

The Best of Both Worlds

The world is spoiled by the innovations in the messaging space, thanks in large to companies stepping up and offering exceptional experiences to users. It’s no surprise to see a surge of messaging applications like WhatsApp, Facebook Messenger, Line, WeChat, and KakaoTalk to name a few, and we expect more to come.

To bring these messaging innovations to B2B and B2C communication, we must make it universal and compatible. Luckily,

RCS (Rich Communication Service) has been in development for years and will soon bridge the gap of innovation and compatibility. Best of all, it is coming very soon.

When RCS arrives, we may witness another wave of messaging platform extinction as the rich feature-set of RCS will likely replace what many messaging applications are doing today.

What do you think?

Finish the year strong with these 4 EOFY tips

The 7 responsibilities of an SMS Marketer