How to measure your SMS character count, and the process of concatenation

When composing an SMS marketing campaign, don’t forget to keep track of your character count. A typical text message is 160 characters long. All characters you use counts toward the length, and their sizes aren’t equal.

The science behind concatenation

You can send text message campaigns that are longer than 160 characters. With our online SMS service, you can deliver messages that are up to 612 characters long using a process called concatenation.

Don’t worry, though. We take care of it all in the background. We use special characters to join the long-format SMS together, and deliver them as one message to your recipients.

You can’t see these characters, but they take up space. That’s why the maximum length is 612 and not 640.

Note: The extra characters are known as user data header (UDH). One SMS message has a max size of 1120 bits. The special characters take up 48 bits, leaving only 1072 bits for you to use.

As you can tell, we apply UDH when you compose an SMS campaign that’s longer than 160 characters. Our platform also has an SMS character counter, so you can test it before sending your campaign. 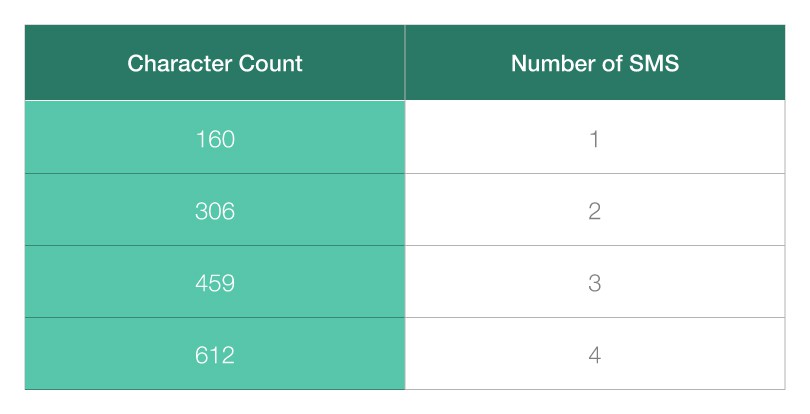 You can send SMS marketing campaigns with symbols like emojis and languages such as Chinese. That said, they require more information (bits) because they use Unicode encoding instead of GSM encoding.

Latin-based languages such as English, French, and Spanish use GSM encoding. Each character is 7 bits, thus allowing a maximum of 160 characters per SMS (1120 bits).

Languages that aren’t supported by GSM encoding use Unicode instead, which is commonly known as Unicode Transformation Format (UTF-16).

Each UTF-16 character is 16 bits each. If you divide 1120 by 16, you get a character limit of 70 per SMS. As soon as you use one Unicode character, our platform switches to support it. Even if you use GSM characters after, the character length will still be 70 per SMS.

Last but not least, don’t forget that custom variables, like your customer’s first name, can drastically affect the character length of your text message campaign. A long name can push your text message over 160 characters (for that specific recipient). You may end up sending two text messages instead of one to guarantee that your entire message fits, which will affect the price of your campaign.

That said, we still highly recommend that you personalise your SMS campaigns to help improve your customer experience.

What are Alphanumeric Sender IDs?

How do I retrieve archived or deleted text messages